Dwarves, Earth-type creatures, and anyone that can follow the rules

Worship who you wish, most dwarves worship Torag

Since your kingdom lies underground, you may build mines regardless of the terrain, paying the usual cost.

Your kingdom starts with a 'Crafting Center' for no additional charge. (This is an Academy, re-flavored to endorse the teachings of magic, psionic, tech, etc. alike and how to craft accordingly)

Materials, such as Mithral and Adamantine, can be purchased at a 10% discount.

Add a flat +1000 gp of progress per day for crafting. This is able to be applied to Paizo tech and Tech sphere.

Alzhak Reger was founded by Delvar Starbreaker. It is the kingdom where he is rallying the survivors of Verk's purge of the dwarven people, so that they may finally have a home where they may live without the fear or hatred of the land they were previously in, preventing them from moving on. With this new land, they may once again look upon the light of the surface, returning the gifts of dwarvenkind to the world, to flourish. This is not to say others are unwelcome... far from it! Any who are willing to obey the laws of the land may live here, especially as the kingdom expands outward to allow for more arrivals. However, regardless of the races and beliefs of others, the capital is the hour. The words instilled within our speak of our dedication... "The Body is The Forge, and The Heart is The Bellows". This is our core, carved into our bones, metalwork within our blood.

The origins of the dwarves, whether they were born there or not, will continue to be Dun Holvar.

Alzhak Reger, much like some others, has recently been founded on Continent of Siacros. The Kingdom is willing to be initially funded by Inevitability, but as they are considered free to follow their own path regardless, the Kingdom will not necessarily assist them. Until the foundation begins, the history has yet to be known, beyond the initial find.

Above, a land full of mountains, hills, and hidden veins, on almost every side, opening up to a river that leads to the sea, the kingdom need only defend on one side by wall, for anyone who can ignore these natural defenses would not have been able to be stopped by a mere wall anyhow.

Below however... that is where the true depths lie. Huge, arching caverns stretch on for as far as the eye could see, glittering gemstones and luminescent crystal, making a natural starry sky; the glow of The Mushroom Forests decorate the cavern paths with an array of vibrant colors. Soon, an underground utopia will be built here — where paths, mines, forges, and mushroom farms will all one day be seen. It brings a tear to the eye, thinking of the glorious future of our children, in this untapped land.

What was once a mere Dwarven stronghold has become the foundation for which Alzhak Reger has flourished around. Named,”The Heart of Mithral” for not only its rich veins of mithral that have emerged seemingly from divine providence, but also the amount of trade that are brought through its gates, the economic heartland of the Dwarves of Siacros cannot be understated.

The capital city for the Republic, Kal’Azgoroth’s defenses are as extensive as its vaults, the structural decision to built it out of a mountain not only an aesthetic, but also tactical decision by the original founders. 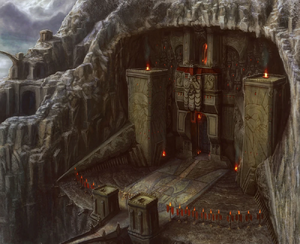 the premier Regian surface-city. Run by retired paladin Sra Rilovo, LG as heck. The main income source for the city is a land tax. While this tax is quite steep, it and sales tax are the only two taxes that the city itself requires, which is some relief for the citizens. Technically, if you don't own land and don't buy things, you don't have to pay the city taxes, which is a pleasant change of pace.

Non-Awakened horses, donkeys, mules, pigs, and cattle are not permitted within city limits. Centaurs and such are appreciative of this, and are more common here than elsewhere within the Republic.

Ava is willing and able to invent the bicycle following a commission from Sra. The city will feature many elevated bicycling paths. The primary methods of transportation would be cycling and electric trams.

Buildings are built to an incredible standard, even by Dwarven standards. Most are nearly sound-proof, earthquake-resistant, non-flammable, and warm in the winter and cool in the summer. 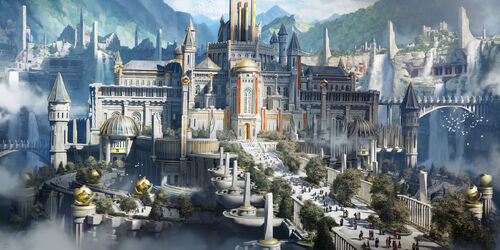 Founded by Aurelius V. Gael in an attempt to create a safe-haven for those with nowhere left to go, New Vienne welcomes all people of all races and professions. While indeed it is looked at with disdain and worry from many outsiders -- most likely due to the prominence of black markets and bordellos, its true purpose is not to promote such enterprises, but rather to serves as a shelter for those who can't help but to work in such professions.

There are a few portals in existence within the Kingdom. One to the Inevitability, and another to some strange, extremely powerful individual... there is rumor that more of such portals exist... it is interesting to note, however, stories make mention of some being magic, others technological, others of some mysterious mental energy, while there are others that are some strange mixture of systems. Although most travel is restricted by the nature of the Kingdom's geography, these portals allow for much more potential for travel.

Tourism may also bring one to the calming, glowing, networks of The Moonsilver Mines of Dormundir, a place famed for its special resources, and its ability to stave off stresses. Especially useful for the troops stationed there, as stressful work plus easy access to stress relief, make for a much easier time than normal.

Having grown tremendously in recent years and enhanced with the addition of new factions to the overall conglomerate, Alzhak Reger’s military has seen a great development in prowess. Originally composed of the undisciplined and the unworthy, under the guidance of Commander Drumheller, and the rule keeping of General Sra, the foundation for what has become the modern day Republic’s military was laid.

Under the current command of General Thale, who has brought the tactical acumen of Fort Ragathiel with him (in addition to a large amount of soldiers) the originally small forces of the mountain have undergone extensive refurbishment and reorganization, now being made up of a proper armed force rather than a mere militia. In addition to industry by Naramoore Steelworks, many of the well-trained warriors have also received technological upgrades to their respective arsenals.

It is unclear as to whether there is a particular specialty beyond the norm, however, across the board, dwarves are masters of metal. This is seen in their ability to obtain the bounty of the earth, forge it, and create wonders of engineering with them. Many have an affinity for related ways, be it metal magic, manipulation of the earth with mental powers, or simply the progression of technology. The leaders embody many of these ways as well, due to our wide array of crafters of every path currently known to the Eteran continent. It remains to be seen what they may discover... who knows, perhaps this new land will bless the people with new potential as well.

While made up of differing individuals of strong repute, ultimately Alzhak Reger’s leaders can be found more uniformly in its Moot. Designed to be the singular unifying voice among many, The Moot is a conglomerate of varying clans and organizations that all seek (at least on paper) to serve the greatest interests of the Republic at large.

Not just composed of Dwarves, The Moot features human representatives from Fort Ragathiel, more tech-orientated individuals from Naramoore Steelworks, those of draconic heritage, planar-touched races, elementals, and an assortment of old and young alike who are all ordained as their respective ‘clans’ by the proper authorities of Alzhak Reger. Usually to be brought in as a clan is a vote in of itself by the overall Moot.

In terms of structure, an issue is presented upon the grand floor, where varying representatives might speak upon the issue and announce the casting of their vote. Debates are frequent, and can eventually rise to the cause of violence if contenders are passionate enough. It is not uncommon to have an issue linger upon the floor for months before decision. Each clan is given one vote, and one vote only, so that no matter how large a respective clan becomes, their political power (theoretically) remains the same. Influence however, is not so limited.

Whatever you want to call him

Defender of the Realm