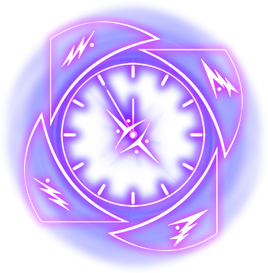 The time knights are an order of Paladins (and, occasionally, people of similar classes or dispositions) who seek to protect the timeline from the machinations of evil creatures. The order was noticeably weakened when a large part of all the people on the continent of Etera were slain by the actions of the Verk Empire in the days leading up to its destruction.

It's unclear exactly how long the time knights have been around. Rumors claim everything from being founded at the dawn of the universe by an unknown deity of time to originating in the future and traveling backwards in time to protect it and ensure its own establishment. What is known is that the time knights are an active force on Etera, acting primarily to protect the timeline from evil but occasionally intervening in other matters that appeal to its members' sense of goodness.

Ranks of the Time Knights

Outside of the important ranks described here, the time knights have assorted functional ranks for noncombatants and supporting roles.

The time knights have an uncanny ability to be present at times and in places relevant to their interests. To nobody's surprise, this is mostly because of their mastery of time magic and general effectiveness at gathering information about potential threats to the timeline. Accordingly, the organization typically sends out however many members it thinks are required to resolve an issue. This can be as little as one, but occasionally as high as five or six. More is usually considered overkill.

Time knights of sufficient wealth and experience almost always carry around some type of transformation tool - this could be a hat of disguise, a transformation trinket, or one of many other items that allow them to rapidly don a costume for combat. Some are even capable of creating an outfit with magic (whether tangible or as an illusion). This holds with the order's philosophy that it is not the face or appearance of members that matters most, but their willingness to fight for the timeline.

Some time knights take this to a further extreme and use their own talents or magical abilities to play music when they arrive and transform, letting absolutely everybody in the area know that they have arrived and are about to fight. (Though some call this silly, it has the practical value of warning civilians to get out of the vicinity immediately, so even the most opinionated members of the time knights rarely do more than grumble a little when somebody does it.)

The time knight must be of any good alignment and instantly loses all class features except proficiencies, martial traditions, and combat talents if their alignment ever ceases to be good. Additionally, the time knight must do their best to slay or imprison any evil creature they encounters who possess the Time sphere or any of its talents, evil creatures that know time magic spells such as haste, slow, or time stop, or evil creatures with abilities that allow them to manipulate time.

In addition to their normal code of conduct, time knights carry around a silver pocketwatch at all times.

Relationships With Other Organizations

Bastille of the Iron Lord: The time knights are currently maintaining a cautious observation of the Bastille of the Iron Lord. While its use of highly advanced time manipulation is deeply suspicious, the fact that it has an angel in charge of day-to-day operations and seems dedicated solely to imprisoning powerful foes means the time knights do not (yet, at least) consider the Bastille an enemy.

Fair Maiden's Cathedral: Though not officially allied, the Time Knights are broadly on good terms with the staff of the Fair Maiden's Cathedral, a centerpoint for religious services and good or neutral-oriented religious activities in Fort Fair Maiden. As the time knights are not bound to follow a specific deity, they are not considered part of a church, but its members are generally welcomed at the cathedral and can search it for allies with specific skills, healing magic, and general services. After the destruction of Fort Fair Maiden, and the cathedral with it, there is no longer a functioning relationship.